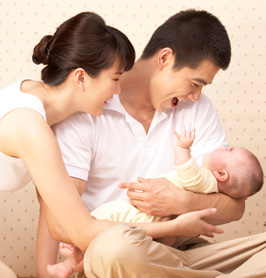 Are Dummies (pacifiers) bad for my child's language development?

When I am trying to get my baby to sleep I find it helpful to put a dummy in her mouth to stop her crying but I hear this may affect her speech later on. Is this true?

The Royal College of Speech and Language Therapists (RCSLT) says that regular use of dummies during the babbling phase can cause speech problems, which may continue even after the dummy is discarded. Dummies prevent a baby from practicing making sounds with his lips, tongue, mouth, and jaw, thereby inhibiting babbling, one of the most important stages in learning to speak. During the first year of life, when your baby is poised to absorb the language surrounding him and starting to make sounds, a dummy is an obstacle to his language development.

I have read that it can be helpful to children if you teach them sign language so that they can communicate with you before they can speak. Before I embark on this I want to find out whether it is really helpful or whether it slows down the child's efforts to speak.

The rationale for introducing sign language to infants is that teaching a few signs aids communication for the frustrated child who can't yet speak. Those opposed to it say that 'signing' can reduce a child's motivation to learn to speak. Nothing takes the place of one-on-one interaction between the child and the adults in his life and the child will only learn how to speak by hearing words. The adults in a child's life should be familiar enough with the child that they can usually interpret what he is trying to say without resorting to sign language. Furthermore, if baby sign language is used, it must always be accompanied by spoken language.

Which language should we speak?

My husband is French and I am English speaking. We would really love for our child to grow up speaking both languages fluently but we are not sure how to ensure that this happens. What is the best approach to take?

When children are very young they can learn any language they are exposed to with total ease so if you want your child to become bilingual it is very important that you make sure that he is exposed to both French and English from the beginning. The ideal situation is that each parent uses his own mother tongue when speaking to the child and is very consistent about doing so. The child will then absorb both languages equally and eventually will be able to speak both with equal efficiency. It may be that your child develops the capacity to speak one language faster than the other and there may also be times when it seems as if he is refusing to converse in one of the languages even though he seems to understand it. But this should not deter you from continuing to use your mother tongue with your child even though he is replying in the other language. In time he will appreciate the effort you put in to give him a strong foundation in both languages.